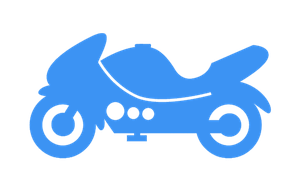 It has been reported that approximately 25 % of motorcycle accident involve a single vehicle (motorcycle) crash. Some of these crashes result from poor road conditions, debris, road construction, mechanical issues, and operator (motorcyclist) error in the form of distraction, inattention, excessive speed, or impairment. There is a good portion of these crashes that result from the negligence or carelessness of other drivers. The single vehicle (motorcycle) crash results from the motorcyclist taking evasive action to avoid the crash and potential harm to others; however, any time that a motorcyclist is forced off course - there can be serious consequences in the form of a crash and personal injuries.

It should be noted that the police report and issuance of a citation can provide for good support for a claim or case on behalf of the motorcyclist. For instance, let's assume that the driver, who attempted the left hand turn, was issued a citation and the police officer wrote up the report in a manner that essentially absolved the motorcyclist from any fault, carelessness or liability. While it is helpful from a claim and case standpoint to have a favorable police investigation and report to your theory of the case, Florida has a set of laws in place known as the Accident Report Privilege. As a result of this set of laws, the actual police report, statements given to the police, and the issuance of a citation are all inadmissible as evidence if the case proceeds to a trial. Evidence must be presented in other forms to establish the fault or liability of the other driver involved in the motorcycle accident. As such, many personal injury victims are surprised to learn about the Accident Report Privilege especially if the personal injury victims are finding out about this concept for the first time at trial.

The Florida Accident Report Privilege is codified in part in Section 316.066 (4), Florida Statutes - Written Report of Crashes which provides that complying with the provisions of this statute shall not be with prejudice to the driver listed on the accident report. As such, the statement of the at-fault driver to the police officer along with the citation issued cannot be presented as evidence. There are some exceptions to this rule; however, for most cases, the police report and statements to the police do not come in as evidence.

Because of the complexities of Florida Motorcycle Accident cases and Florida law, a motorcycle accident personal injury victim should contact an attorney for advice, guidance, and legal representation. David A. Wolf is a personal injury attorney with over 28 years of experience with a mission of Giving a Voice to Injury Victims and Their Families. He is the author of 12 books and over 3,500 articles on personal injury and safety issues. Contact David A. Wolf today for a Free Consultation. Get D. Wolf On Your Side - At Your Side.