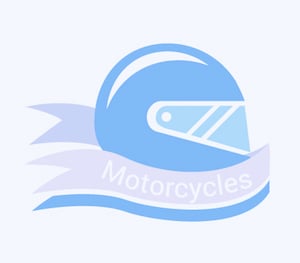 The requirements for the use or wearing of a motorcycle helmet are governed by Section 316.211, Florida Statutes which provides that a person is required to wear a motorcycle helmet in the State of Florida unless there is a certain amount of medical benefits coverage in place. The law specifically allows motorcyclist over the age of 21 years old to opt out of the statute requiring the wearing of a helmet by meeting this requirement.

Over the years, the requirements for the wearing of a motorcycle helmet have changed. Currently, a motorcycle rider can be exempt - for purposes of the aforementioned statute - from wearing a motorcycle helmet if the person is over 21 and is covered by an insurance policy that provides for at least $10,000 in medical benefits if the person is injured in a motorcycle. If these requirements are met, there is no requirement by statute to wear a motorcycle helmet; however, there can still be an argument in a personal injury case involving personal injuries that a motorcyclist who fails to wear a helmet is negligence or careless. The aforementioned statute does not contain any language one way or the other that prevents a defendant, company, or insurance company from arguing that the failure to wear a helmet constitutes negligence. As such, it would appear that the motorcycle helmet defense is still a viable defense in the State of Florida; however, the elements of the defense must be established.

Rex Utilities v. Gaddy, 413 So.2d 1232 (Fla. 3rd D.C.A. 1982) is a case that interpreted and applied language of Section 316.211, Florida Statutes when there was no such "medical benefits" escape clause to the requirements of wearing a helmet. Nonetheless, it appears that this case is still good law as it applies to how the motorcycle defense must be established to serve as a potential defense in a civil case involving personal injuries of a motorcyclist. In essence, the Court in this case ruled that the failure to wear a motorcycle helmet was not admissible since the defense failed to prove or establish that the failure to wear a helmet was the proximate cause of the injuries sustained by the motorcyclist.

Here is an example that will help further explain the ruling of the Court. Let's say that John Smith, a motorcyclist, is rear ended at a traffic light by another motor vehicle. John Smith carried the requisite $10,000 in "medical benefits" coverage and, as such, elected not to wear a motorcycle helmet. As a result of the crash, John Smith suffered a broken leg and no other injuries. John Smith did not suffer nor did John Smith clai that he suffered a head injury. Under the facts of this particular example, the fact that John Smith was not wearing a helmet is wholly irrelevant to the case at hand. As such, it is likely that a Court would exclude any mention of the failure of John Smith to wear a helmet. The analysis would be different if John Smith suffered a head injury that would have been prevented or significantly lessened with the wearing of a helmet. Under this fact pattern, there would need to be expert testimony that there was a causal effect from the failure to wear a helmet and the injuries suffered by the motorcyclist.

As you can see, the requirements and defenses associated with the wearing of a motorcycle helmet can be quite confusing and challenging. As such, it is typically helpful to secure advice, guidance, and legal representation from a Florida Motorcycle Accident Attorney. Certainly, in many instances, a motorcyclist has the freedom and liberty to refrain from wearing a helmet but this decision may impact (but not necessarily prevent) the pursuit of a personal injury case on behalf of the motorcyclist. Contact David A. Wolf for a free consultation on your motorcycle accident case or other personal injury matter. Get D Wolf - On Your Side - At Your Side.

Contact Us
Motorcycle Accidents
Other Personal Injury Topics
Florida Motorcycle Laws and Legal Rights of Motorcyclists
Client Reviews
★★★★★
I was in need of legal advice and David was there to assist. I was given advice most attorneys would charge outrageous fees for. When I called David promptly replied, got a grasp of my issue and gave wonderful advice and then referred me to someone who could better handle my issue. I would highly recommend him and if anything else comes up, my first call will be to him. Tracey
★★★★★
David did a great job representing my family in a recent legal matter. He provided great communication in a clear, concise and timely manner. He thoroughly outlined what our options were and answered all our questions. We were extremely pleased with the outcome and highly recommend anyone seeking legal counsel to contact him. David
★★★★★
David Wolf has provided legal advice and representation to me on a variety of issues. I have referred family members and friends to him as well. Whenever a legal issue arises, he is the first person I contact because I am always provided prompt and practical legal advice. I know that I am not David’s only client but he sure does his best to make me and others feel that way. Jill Kestner
★★★★★
David did an outstanding job with my case from start to finish. He was professional and courteous throughout the process and he made sure that I stayed informed. I would recommend him to anyone seeking legal counsel. Adam
★★★★★
David Wolfe was very prompt in returning my call for advice. He was sensitive to my issue, gave clear legal advice, with creative options. Extremely thorough and caring. Will use him in future if in need again and will refer him to family and friends. Jo
View More
Submit a Law Firm Client Review