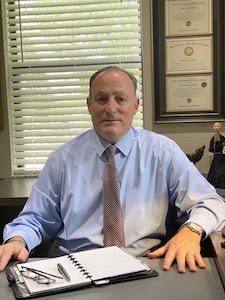 David Wolf is a proud resident of Flagler Beach, Florida where he enjoys the true Florida lifestyle of a retro beach town that often is referred to as a "hidden gem". Located on the Atlantic Ocean coast between Ormond Beach / Daytona Beach to the South and Palm Coast / St. Augustine Beach to the North, Flagler Beach with a population of about 5,000 residents has its own unique personality. Flagler Beach has about 6 miles of coastline and total about 4.1 square miles in its city limits. The city has a post office, public library, historical museum, and its own public works including a water department. Due to building height restrictions, Flagler Beach has retained its small town charm with breathtaking views of the beach. The Flagler Beach Pier is located at 215 Ocean Shore Boulevard just two blocks off of the main roadway (Moody Boulevard) leading into and out of Flagler Beach.

As lifelong Floridian and a Double Gator (University of Florida) graduate (Business Finance and Law), David Wolf saw how Flagler Beach would be a great place to live and a great place to work. Unlike many cities and towns arose the State of Florida, Flagler Beach has maintained its small town charm. The city's is rooted in the strong connection it has with its residents, frequent visitors to the beaches and local attractions, and, yes, the small businesses that line the streets in Flagler Beach including the main roadway (Moody Boulevard) from I-95 over the intracoastal right to Ocean Shore Boulevard (A1A). 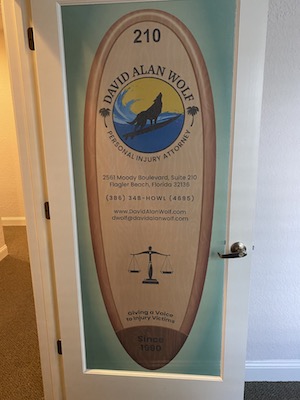 For over 30 years, David Wolf has worked in a small firm providing representation for injury victims and their families. He takes pride in his ability to be available to his clients days, nights, weekends, and holidays. In the pre-sunrise early mornings, you may see David Wolf on one of his daily walks down Ocean Shore Boulevard / A1A to get some exercise in and to plan for the day ahead. With mobile phone in hand at just about all times, clients and prospective clients have easy access to David Wolf by phone, text message, or e-mail. As noted by David Wolf, "when a person is dealing with the aftermath of an accident or a traumatic event, the person deserves access and information from the attorney. "With David Wolf, you get access and so much more as he brings 30 years of experience, knowledge, and problem solving skills to the table for each and every client. For Flagler Beach lawsuits, state court cases are filed in the Seventh Judicial Circuit. The courthouse is located in Bunnell at 1769 East Moody Boulevard which is a straight shot down Moody Boulevard from the Law Office of David Alan Wolf which is located near the Intracoastal Bridge.

David Wolf is an award winning attorney who also has been recognized by his peers and attorney directories for his years of service to his clients and commitment to excellence. He is an Eagle Member with the Florida Justice Association. Martindale Hubbell, which has been in print since 1868, has designated David Wolf as an AV Rated attorney which the highest level for skill and integrity. David Wolf also is designated at a Platinum Client Champion which is awarded to attorneys who excel at service to their clients. David Wolf is a 10.0 Superb Rated Attorney in the AVVO Lawyer Directory. He is also a 10.0 Rated Attorney in the Justia Lawyer Directory. Thomson Reuters is a company that was formed originally as Reuters in 1851 in England. Over the years, Thomson Reuters has grown into a larger international community that operates in different industries including the legal industry. Super Lawyers is operated / managed by Thomson Reuters. There is a rigorous selection process to be named a Super Lawyer. David Wolf is a Super Lawyer in the field of personal injury. He is quite proud of this award in that there are multiple factors considered in the selection process.

Contact David Wolf today for a Free Consultation to get advice, guidance, and direction as to your legal rights related to a personal injury matter. Call David Wolf at (386) 348-HOWL or (386) 348-4695. You can also send him an e-mail at dwolf@davidalanwolf.com 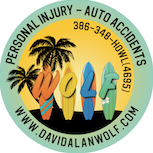 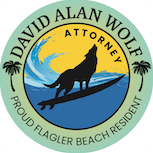 Get D Wolf On Your Side - At Your Side for your personal injury case in Flagler Beach or other locations. Remember, Where There Is A Wolf - There Is A Way.

Flagler Beach - Speed Limits, Safety and Personal Injuries
Contact Us
Other Personal Injury Topics
Client Reviews
★★★★★
I was in need of legal advice and David was there to assist. I was given advice most attorneys would charge outrageous fees for. When I called David promptly replied, got a grasp of my issue and gave wonderful advice and then referred me to someone who could better handle my issue. I would highly recommend him and if anything else comes up, my first call will be to him. Tracey
★★★★★
David did a great job representing my family in a recent legal matter. He provided great communication in a clear, concise and timely manner. He thoroughly outlined what our options were and answered all our questions. We were extremely pleased with the outcome and highly recommend anyone seeking legal counsel to contact him. David
★★★★★
David Wolf has provided legal advice and representation to me on a variety of issues. I have referred family members and friends to him as well. Whenever a legal issue arises, he is the first person I contact because I am always provided prompt and practical legal advice. I know that I am not David’s only client but he sure does his best to make me and others feel that way. Jill Kestner
★★★★★
David did an outstanding job with my case from start to finish. He was professional and courteous throughout the process and he made sure that I stayed informed. I would recommend him to anyone seeking legal counsel. Adam
★★★★★
David Wolfe was very prompt in returning my call for advice. He was sensitive to my issue, gave clear legal advice, with creative options. Extremely thorough and caring. Will use him in future if in need again and will refer him to family and friends. Jo
View More
Submit a Law Firm Client Review