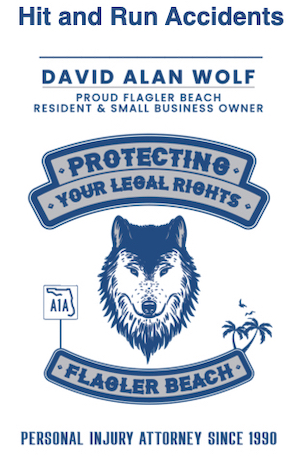 Certainly, there are both legal and moral implications to hit and run accidents. There are a variety of reasons that a person flees from an accident scene and essentially commits a hit and run type of crime including the following:

The driver was impaired by alcohol or drugs at the time of the crash and did not want risk being arrested for such an offense;

The driver did not have a valid driver's license;

The driver did not carry the State of Florida required automobile insurance on the vehicle involved in the crash;

The driver did not want to be subject to criminal or civil liability for the injuries caused to the injury victim or other vehicle; and / or

The driver is just an irresponsible and thoughtless person and affirmatively decided to keep on going rather than render aid, information, or assistance.

It should be noted that none of the above reasons are legal or moral justifications for fleeing the scene of an accident involving personal injuries and / or property damage.

Flagler Beach attorney David Wolf has handled a number of hit and run type of crashes throughout his 30 year legal career. One such crash involved serious bodily injury to the victim. Fortunately, there was an eye witness to the crash and the incident was reported to local law enforcement. The at-fault driver was tracked down by the police who visited her home. Her first words were, "I need to contact my attorney." There did not seem to be any remorse for the accident in question but there did appear to be knowledge of the accident. David Wolf took on the case and successfully recovered over $2 Million dollars for the injury victim. While the at-fault driver did not stop and render aid, assistance, or information, the at-fault driver did happen to carry substantial insurance - all of which was recovered by attorney David Wolf on behalf of the client. If there is substantial insurance in place for the at-fault driver, there can be a substantial recovery as illustrated by this one case. It should be noted that the at-fault driver is not located or identified in many such hit and run accidents. Furthermore, in the cases in which the at-fault driver is located and identified, there may not be any bodily injury liability coverage to pursue. This may, in turn, present practical problems in pursuing such a case.

Many accident victims and families do not realize that there may be a source of financial recovery or settlement even when the at-fault driver cannot be identified OR even when there is no bodily injury injury insurance to go after. If the injury victim, the owner of a vehicle occupied by the victim, or a resident family member of the vicim carried Uninsured Motorist coverage, there may be a source of recovery on behalf of an injury victim. In another case handled by attorney David Wolf, a phantom vehicle negligently was speeding and blocked another driver was changing lanes away from stopped traffic. The driver of the phantom vehicle (as the name indicates) fled the scene. A case was pursued under the injury victim's Uninsured Motorist policy and there was a recovery of $500,000 for this particular case.

Unfortunately, for far too many hit and run accident victims, there is no source of automobile insurance recovery on the case. As such, David Wolf has also handled some cases in which were closed out without a recovery at all due to the facts and circumstances of the case. Certainly, a hit and run injury victim is deserving of compensation but not all cases work out. If any attorney guarantees a recovery, be wary of that attorney as there are and should not be any guarantees with any particular legal case.

David Wolf is a Flagler Beach resident and small business owner. He takes pride in getting to know each and every one of this clients and remaining their attorney and main contact throughout the duration of the case. Since he was 14 years old, David Wolf has been employed. Prior to beginning his career in law, he worked as a landscaper, plant nursery worker, cook / cashier at McDonald's, summer camp bus driver, summer camp counselor, and teaching assistant in college, David Wolf understands the value of a strong work ethic and the importance of being able to work. As a personal injury attorney, David Wolf has represented people from all walks of life in Flagler Beach and the rest of the State of Florida.

As the author of 12 books that focus on the subject of personal injury, David Wolf gladly shares information and knowledge he has obtained over his 30 plus year law career. He has lectured and presented seminars to other attorneys as well as legal nurse consultants. David Wolf also has been interviewed through the years various media outlets including Time Magazine. David Wolf's day-to-day focus is on his client work and caseload. He prefers to focus on his work rather than other attorneys who seemed enamored by the spotlight and publicity.

David Wolf provides a Free Consultation on all personal injury cases including hit and run accidents. Contact attorney David Wolf today at (386) 348-4695 or dwolf@davidalanwolf.com David Wolf firmly believes in Giving a Voice to Injury Victims and Their Families.

Contact Us
Personal Injury
Client Reviews
★★★★★
I was in need of legal advice and David was there to assist. I was given advice most attorneys would charge outrageous fees for. When I called David promptly replied, got a grasp of my issue and gave wonderful advice and then referred me to someone who could better handle my issue. I would highly recommend him and if anything else comes up, my first call will be to him. Tracey
★★★★★
David did a great job representing my family in a recent legal matter. He provided great communication in a clear, concise and timely manner. He thoroughly outlined what our options were and answered all our questions. We were extremely pleased with the outcome and highly recommend anyone seeking legal counsel to contact him. David
★★★★★
David Wolf has provided legal advice and representation to me on a variety of issues. I have referred family members and friends to him as well. Whenever a legal issue arises, he is the first person I contact because I am always provided prompt and practical legal advice. I know that I am not David’s only client but he sure does his best to make me and others feel that way. Jill Kestner
★★★★★
David did an outstanding job with my case from start to finish. He was professional and courteous throughout the process and he made sure that I stayed informed. I would recommend him to anyone seeking legal counsel. Adam
★★★★★
David Wolfe was very prompt in returning my call for advice. He was sensitive to my issue, gave clear legal advice, with creative options. Extremely thorough and caring. Will use him in future if in need again and will refer him to family and friends. Jo
View More
Submit a Law Firm Client Review