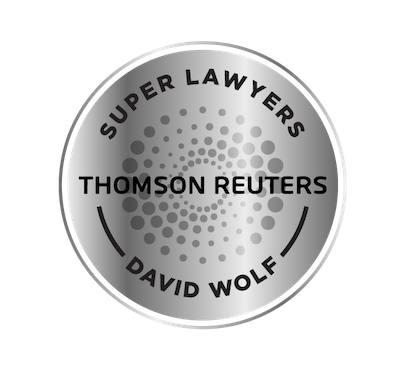 David Wolf has been recognized as a "Super Lawyer" by Thomson Reuters. The four step process to gain entry into the Super Lawyer Registry begins with the Nomination Process by fellow attorneys or by the research department employed by Thomson Reuters. From there, there is independent research completed by Super Lawyers as to the accuracy, quality, and quantity of the information submitted for a nominee including verdicts / settlements, years of experience, honors and awards, position within the law firm, education, publications, and other outstanding achievements and milestones.

The next step involves the peer review by selected practice areas by a blue ribbon panel which rates each nominee on a scale of one to five. Step 4 involves the Final Selection process in which the nominated attorney is placed into different categories. Points are then assigned to each candidate. According to Super Lawyers, "only five percent of the total lawyers of the state are selected in Super Lawyers."

Since 1990, David Alan Wolf has represented individuals who have suffered personal injuries as result of the negligence or fault of other people, businesses, and government entities. David Wolf prides himself in the fact that he had dedicated his career to the representation of individuals rather than big business or the insurance industry. Cases are handled on a contingency basis which means that David Wolf does not charge attorney fees or costs unless there is a financial recovery on the case.

In addition to being designed in top 5 percent of attorneys as a Super Lawyer, David Wolf has also been recognized by Martindale Hubbell as an AV Preeminent Rated attorney which is based on peer ratings and reviews for professionalism and ethical conduct. He also has been designated as a 10.0 Top Rated Lawyer by the AVVO Lawyer Directory.