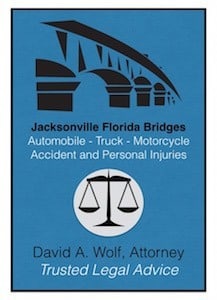 The Dames Point Bridge aka Napolean Bonaparte Broward Bridge also spans over the St. Johns River. The Dames Point Bridge is one of the largest cable-stayed bridges in the United States. It is quite a beautiful and artistic looking bridges. It is also a bridge that can look quite imposing to drive over. The main span of the bridges measures 1300 feet with a height of 175 feet. The total length of the bridge is approximately 2 miles in length.

The Fuller Warren Bridge carries Interstate 95 traffic across the St. Johns River. The bridge is approximately 1.5 miles in length. The bridge has 8 lanes in total. It was rebuilt and opened to traffic in 2002.

It should be noted that many people have a fear of driving over bridges. The name for this condition or phobia (fear) is called Gephyrophobia. It is a difficult condition to spell and also a difficult phobia (fear) to live with and deal with especially in cities and towns like Jacksonville, Florida which are covered with bridges throughout the city. Many people fear driving over bridges due to the height, narrow lanes, waterways, and other unique aspects to driving over a bridge. Certainly, a high bridge over a vast waterway causes anxiety for many people. This combined with traffic and distracted driving can really add to the fear of drivers on the roadway.

When person is injured as a result of an automobile accident, trucking accident, or motorcycle accident and near a Jacksonville Florida bridge, it can quite a stressful experience and one that remains in the memory for years to come or even a lifetime. It is important for the Florida Automobile Accident injury victim to obtain guidance, counsel, and legal representation from an experienced Florida Personal Injury Attorney. David A. Wolf has been representing injury victims and their families for over 28 years. Get D. Wolf On Your Side - At Your Side. David A. Wolf provides a FREE CONSULTATION for all injury victims and handles the injury case (if accepted) on a contingency basis - NO RECOVERY - NO FEES OR COSTS.

Contact Us
Motor Vehicle Accidents
Other Personal Injury Topics
Client Reviews
★★★★★
I was in need of legal advice and David was there to assist. I was given advice most attorneys would charge outrageous fees for. When I called David promptly replied, got a grasp of my issue and gave wonderful advice and then referred me to someone who could better handle my issue. I would highly recommend him and if anything else comes up, my first call will be to him. Tracey
★★★★★
David did a great job representing my family in a recent legal matter. He provided great communication in a clear, concise and timely manner. He thoroughly outlined what our options were and answered all our questions. We were extremely pleased with the outcome and highly recommend anyone seeking legal counsel to contact him. David
★★★★★
David Wolf has provided legal advice and representation to me on a variety of issues. I have referred family members and friends to him as well. Whenever a legal issue arises, he is the first person I contact because I am always provided prompt and practical legal advice. I know that I am not David’s only client but he sure does his best to make me and others feel that way. Jill Kestner
★★★★★
David did an outstanding job with my case from start to finish. He was professional and courteous throughout the process and he made sure that I stayed informed. I would recommend him to anyone seeking legal counsel. Adam
★★★★★
David Wolfe was very prompt in returning my call for advice. He was sensitive to my issue, gave clear legal advice, with creative options. Extremely thorough and caring. Will use him in future if in need again and will refer him to family and friends. Jo
View More
Submit a Law Firm Client Review